If we want to make it easy(ish) to get into space, then it would be very helpful to have a sky hook. Once we have that in place we can build an elevator.
Lets look into the physics / maths of how it could be done.
Suppose a small object of mass m is travelling in a cirle round a sphere. The object is a distance R from the centre of the sphere.
In vector notation, write its position as: \[\textbf{p}=R\left( \begin{array}{c} \sin(\omega t) \\ \cos(\omega t) \end{array} \right)\] We can then differentiate that twice with respect to time and we find the acceleration: \[\textbf{a}=\frac{\partial^2\textbf{p}}{\partial t^2}=-\omega^2 R \left( \begin{array}{c} \sin(\omega t) \\ \cos(\omega t) \end{array} \right) = - \omega^2 \textbf{R} \]
So, when an object is moving in a circle, there is an acceleration towards the centre of that circle.
But we know that the force: \[\textbf{F}=m \textbf{a}\] So if we want to maintain the object rotating about the centre, then we need apply a force toward the centre of magnitude: \[F=m \omega^2 R\] That is called the centrifical force. 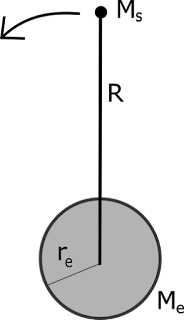 Thin in the right places

Which ever way we do it, when the tension has been determined, we can return to equation 3 to find the mass per unit length and then integrate to find the total mass of cable required: \[M_c = \int^R_{r_e}dm(r) = \frac{\alpha}{Y} \int^R_{r_e}T(r)dr\] That integral can be done numerically.

I've written a calculator using Google sheets and I've published it as a template. To have a look, log-in using a google (gmail) account and click on this link.

Things to consider:
stability to perturbations including wind
could attached kites be helpful in reducing the maximum tension?
collisions: birds, planes, other satellites, space debris.
safety if it snaps. One option would be for the anchor at the earth to release as soon as a break has been detected.

Love to see work like this. We inside the International Space Elevator Consortium research committee are trying to establish an effort to refine the many different approaches to simulating the dynamics of the long tether for space elevators. There are so many questions to be asked? How long must it be? how stable can it become? how much dynamic motion will occur at the GEO altitude? what is the magnitude of the forces inside the tether [not only just mass and centripetal force, but wind shear, movement of tether climbers, motion of the tether, or tension variation along the tether and elastic factors]. If you are interesting in participating, please go to www.isec.org and participate as a volunteer in this global effort with the future of CIS lunar flight as its future.
Pete Swan, President of ISEC.